Genoa, 23 May 2019 – Researchers at Istituto Italiano di Tecnologia (IIT) presented at ICRA 2019 – the International Conference on Robotics and Automation held in Montreal (Canada), the most recent results about the newest version of the hydraulic quadruped robot, HyQReal. They completed the design, assembly and testing of the HyQReal, which has demonstrated that it is capable of pulling an airplane for more than 10 meters. The HyQReal is developed to support humans in emergency scenarios.

HyQReal is 1,33 m long and 90 cm tall, and its weight is 130kg. The robot is protected by an aluminum roll cage and a skin made of Kevlar, glass fiber and plastic. The quadruped has custom-made feet made in special rubber for high traction on the ground and is equipped with a 48 Volt battery which powers four electric motors connected to four hydraulic pumps. The robot has two onboard computers: one dedicated to vision and one to control.

The new features have been tested at Genoa Airport, in Genoa (Italy), with the support of Piaggio Aerospace, demonstrating the power of HyQReal by pulling a small passenger airplane (Piaggio P180 Avanti). 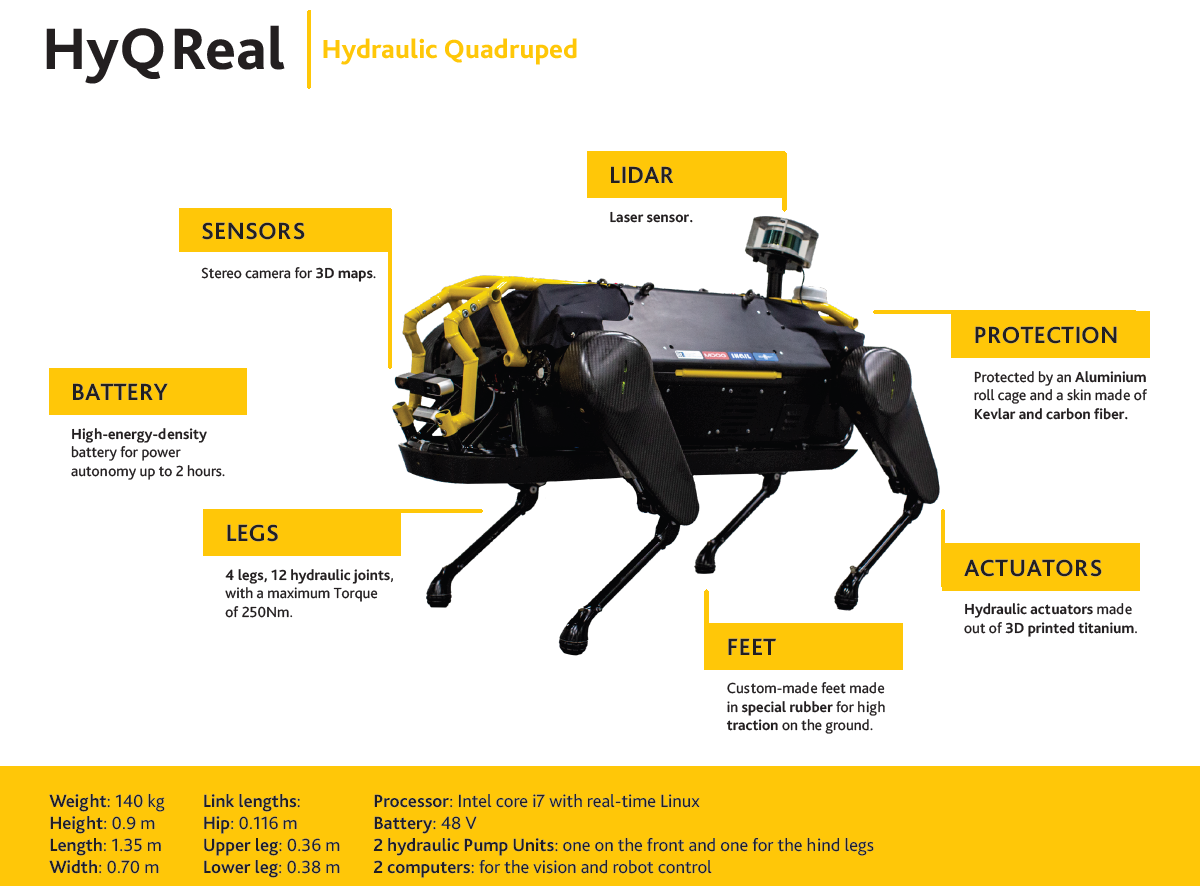 The new robot is the latest version of the HyQ robot series, hydraulically powered quadruped robots developed by researchers at the IIT since 2007. The long-term goal of the project is to create the hardware, software and algorithms for robust quadruped vehicles for rough terrain that can be tailored to a variety of applications, such as disaster response, agriculture, decommissioning, and inspection. Compared to the previous versions, HyQReal is completely power-autonomous with onboard hydraulics, batteries and wireless communication. Furthermore, the robot features a higher ruggedness, reliability and energy efficiency.

The new robot is the main output of the first years of joint lab activities between IIT and Moog, which have been inaugurated in September 2016, with the goal to develop the next generation of hydraulic legged robots. The joint lab combines IIT’s know-how in the design of the hardware and software of legged robots, with Moog’s expertise in miniature, high-performance actuation solutions.

Moog Inc. is a worldwide designer, manufacturer, and integrator of precision control components and systems. For HyQReal, Moog has developed most of the hydraulic actuation system, including hydraulic pump units, smart manifolds, fluid rotary unions and Integrated Servo Actuators (ISA). Moog has specifically developed components for HyQReal that will find an application in the mobile robot market where energy efficiency and high performance are important.

IIT has led the overall development of the robot’s hardware and software. In terms of hardware, IIT focused on the design of the torso, legs, electronics, hydraulic hoses, fall protections, and sensing. Additionally, it coordinated the integration of the actuation subsystems developed by Moog. In terms of Software, IIT adapted its locomotion control framework that it has developed over the last decade.